Two of our nephews spent last Friday night with us. I didn't have anything crafty planned or a specific outing...just pizza and a movie and then bedtime. It was the first time we've had them over---which as they're 6 and 9 years old seems rather shameful. But times change...we used to see them a LOT more than we do now so sleepovers were never a thought. I'm actively working on changing that, though. The 9 year old and Oldest are so sweet together that it warms the cockles of my heart watching their interchanges. The 6 year old is two years older than Youngest so they don't have that much in common, but as a group they get along very well.

As supported by this, unstaged, picture. 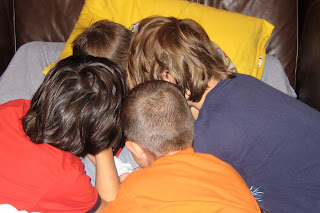 My oldest nephew is playing his DSi while the others watch. (Hmmm. Have we come full circle in terms of electronic screens? Small to extra-large back to small...)

I absolutely love having relatives over and making memories with them. We'll be seeing them again tomorrow as we head over to Marietta Square for its 33rd annual Harvest Square Arts and Crafts Festival. There'll be arts and crafts (duh), scarecrow contest entries, a kids' costume contest, a pet costume contest. We're not prepared to participate in the kids' costume contest, but this family will be represented next year. Husband is an EXCELLENT costume-maker!.